For nearly sixty years, Willie Nelson has consistently produced some of the finest American music. He has also consistently been married, un-married, divorced, and remarried.

In a 2010 interview with the UK’s Telegraph newspaper, Willie gave his view on his marriages: “Along the way you pick up wives and kids and you are responsible for them. You don’t discard them. There is no such thing as ex-wives, only additional wives.”

Perhaps it shouldn’t surprise the reader that one of the founders of the “Outlaw Country” movement in the 1970’s doesn’t mind constructive polygamy. The subtleties of marriage law have evidently eluded him, just as have laws regarding, say, income taxes and marijuana.

But we don’t look to country singers for our scruples; we look to them because they understand the frailty of human nature and the need for redemption. And nobody does that better than Willie Nelson.

This post is the the first of a four-part series on Willie Nelson’s 1974 album entitled “Phases and Stages,” an incredibly insightful commentary on the stages of a divorce. Side A details a divorce from the woman’s perspective while Side B gives the man’s point-of-view. I am going to work through the album in four parts in order to parallel what some have termed the “Four Stages of Divorce.” 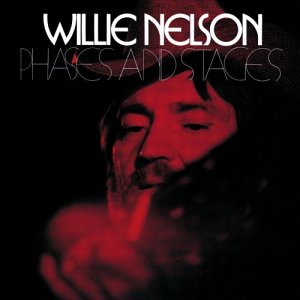 Stage One of Divorce: Shock and Disbelief

The album begins with a refrain that appears numerous times on the album: “Phases and stages,  circles and cycles—scenes that we’ve all seen before, now let me tell you some more.”

The two parties’ initial understanding of their breakup could not be more dissimilar. The first scene with the wife details her growing frustration with completing mundane household chores for a man whose love has grown cold: “Washin’ the dishes, scrubbin’ the floors; caring for someone who don’t care anymore. Learnin’ to hate all the things that she once loved to do.”

Willie Nelson then cites an example, brilliantly interweaving the chores with the husband’s infidelity: “Like washing his shirts, and never complaining—except of red stains on his collar.”

But it only gets more chilling with the next line, executed as only Willie (accompanied by Trigger, his famous guitar) can: “Ironing and crying, crying and ironing—caring for someone who don’t care anymore.”

The song is simple and short, but it is as sad as any song the genre offers—and that is saying something.

The first scene we see with the husband is caught on the most popular song from the album: “Bloody Mary Morning.” As I said, the husband’s initial reaction to his wife’s departure is noticeably more shallow compared to the wife’s. As the album develops, we see just how differently the parties react to the breakup—whereas the wife is initially distraught and moves toward closure, the husband begins by trying to escape but eventually feels the same angst about the divorce that we see with the wife at her ironing board.

On “Bloody Mary Morning” we are told that the husband is on a flight from LA to Houston to forget his wife. Other than his comment that “the smog and haze [is] reminding me of how I feel,” he appears nonchalant. As I said, he will only begin to realize his hurt as time wears on. Until then, he’s apparently satisfied with more infidelity and vodka.

The next “installment” will detail the parties’ move through the second stage of divorce: “Initial Adjustment.”

How to Establish Paternity

How much does a car loan cost? Options in bankruptcy

How to tell when you need a family lawyer and the dangers of fighting it on your own.